Reports are out claiming that Paris Saint-Germain have pulled back from a move for Real Madrid winger Angel di Maria. 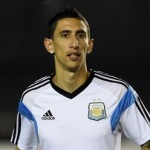 According to reports by Marca, the French giants have been surprised by the reports over a deal for Di María, insisting talks have gone no further than the exploratory stage.

Friday’s meeting between Real president Florentino Perez and PSG’s Nasser Al-Khelaïfi was all about the French club assuring the Madrid giants that no negotiations would be opened with Di Maria without their knowledge. There was certainly no discussion over a fee for the Argentine.

Real are seeking €60 million for the midfielder, who is also being linked with Manchester United.