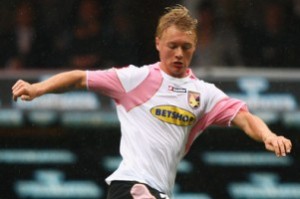 Interesting transfer news are out and it has been reported that Manchester United and Manchester City are battling for Palermo defender Simon Kjaer.

Local newspapers have reported that Roberto Mancini is ready to announce his arrival at Manchester City by going head to head with Sir Alex Ferguson in the race to sign Kjaer.

The Palermo central defender is high up on the Manchester United boss’ January window wish list, while Liverpool are also monitoring his progress.

However, it is believed that Mancini is planning to beat both to the 20-year-old’s signature as he bids to solve the defensive problems which have blighted Manchester City’s season so far.

Danish international Kjaer has revealed that he is happy at Palermo, having signed from FC Midtjylland last year but with an £11m get-out clause, it would present no problems for moneybags City to entice him to Eastlands.

Kjaer told reporters last week that he is happy at Palermo and wants to help the club push for European football.

He added that he has three years left on his contract and that he has not spoken to anyone as he is fully focused on Palermo.