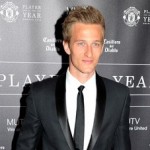 Reports are out claiming that Manchester United goalkeeper Anders Lindegaard is being linked with a move to Norway.

The Daily Mail reported that Lindegaard has been linked with Molde and a possible swap dealing involving Norway goalkeeper Orjan Nyland.

Lindegaard has since drifted out of contention as a serious rival to David De Gea and has not played at all this season. It was thought he might have been called up for Sunday’s FA Cup tie at Yeovil but Van Gaal left him on the bench again.