It has been reported that Manchester United goalkeeper David de Gea has hopes of a Spain breakthrough tonight. 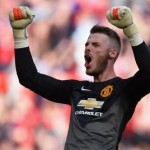 Spain, who won the last two European tournaments in 2008 and 2012, face trips to Slovakia on Thursday and Luxembourg on Sunday having kicked off their qualifying campaign with an impressive 5-1 win over Macedonia last month.

During the last international break, De Gea made his first start for his country in the friendly defeat to France.

“There had been a little bit of talk in the press about me playing in this game and to actually play was one of the best moments in my career. I want to play in more games like this for the national team – it was an unbelievable feeling,” De Gea told ManUtd.com.

“When you are in the national team you’re working with the top goalkeepers in your country – it’s great to be part of. We all try to learn from each other.

“When I played the last game Casillas talked with me before and said ‘you can do it, this is your time.’ It’s important for the young keepers when you have someone like Casillas or Victor Valdes speaking to you like this.”

Sir Alex Ferguson Determined To Cash In On Nemanja Vidic

Arsene Wenger Insists David Moyes Must Be Given More Time