It has been revealed that Manchester United goalkeeper David De Gea is looking forward to returning to Spain this week. 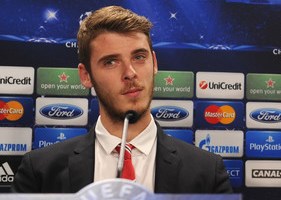 “I’m looking forward to the match a lot,” he told ManUtd.com.

“It’s a great stadium and San Sebastian is a very special city. I think their fans will create a very good atmosphere so it should be an enjoyable game.

“It’s always a good experience to go back to Spain and, of course, doing so wearing the Manchester United shirt makes me very proud. I’ve played for United in Spain against Madrid and Bilbao and it was very special.”

He added: “We know that if we get the three points we’ll have one foot in the knockout rounds, but it won’t be easy. Real Sociedad showed they are a strong team when they came to Old Trafford and they’ll be even stronger at home in front of their own fans.”