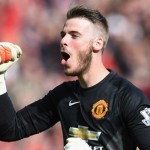 It has been reported that Manchester United goalkeeper David de Gea has rejected rumours linking him with Real Madrid.

The Spanish international goalkeeper is yet to commit to a new contract at Old Trafford, but the 23-year-old has played down talk of a return to La Liga, before reflecting on his side’s start to the season under Louis van Gaal.

“[They are] Just rumours. I’m happy here,” he told Kicker.

“Starting problems are quite normal under a new coach with a complete new concept,” he continued.

“That’s a process and Van Gaal always says that we will improve, but it takes time. But without a doubt, United have to reach the Champions League again.”