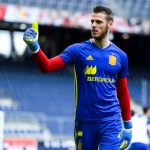 Reports have emerged claiming that Manchester United goalkeeper David de Gea has denied a claim reported in a Spanish newspaper that he organised a sex party with prostitutes for teammates in which a woman was made to take part against her will.

The claims are contained in court papers in a trial against a pornography baron seen by El Diario newspaper.

A witness claims the defendant forced her and another girl into sex with two Under-21 internationals in 2012.

“I am the first one to be surprised by this report. I deny it, it is false and nothing more, it is a lie and false,” de Gea told a press conference at Spain’s Euro 2016 training base.

“It is false what is coming out in the press and it will be in the hands of my lawyers,” he added.