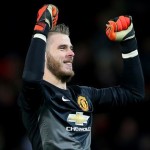 The Sun says United look set to offer the Spanish international a new contract worth a massive £36million.

The deal would see the Spaniard become the richest No.1 in football history, fending off the reported interest from Real Madrid, who see him as their long-term stopper.

De Gea’s wage will reportedly be upped to £140,000-per-week – over double what he is currently earning on his current deal.

The new contract would reportedly stretch across five years and significantly tops the deal which neighbours Manchester City are set to offer their goalkeeper Joe Hart.