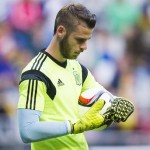 It has been reported that Spain manager Vicente Del Bosque insists David De Gea is ready to start for his country.

The 24-year-old goalkeeper has experienced an interrupted summer as his protracted transfer from Manchester United to Real Madrid rumbled on.

Last week, De Gea missed out on his dream move to the Santiago Bernabeu but he has put that behind him and is now focused and prepared to grace the pitch for Spain in Tuesday night’s Euro2016 qualifier against Macedonia if Del Bosque opts to use him.

“He’s in condition to play. We have talked with him and he is fine,” Del Bosque told Cope.

“I do not know if he will play or not but he is OK and that’s all I wanted to know. He is a mature guy and is ready to play without suffering any burden of what happened.”

Del Bosque added: “I did not want to give him any advice because many people have already done it. I just asked whether he was in condition to play and he told me yes. Nothing else.”