It has been reported that Manchester United goalkeeper David De Gea’s chances of being fit for this weekend’s trip to Arsenal have increased according to reports. 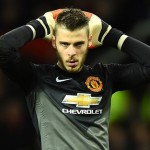 The 24-year old Spanish international goalkeeper sustained a finger problem while training with Spain late last week, forcing him out of the weekend’s Euro2016 win over Belarus, and Tuesday night’s friendly with Germany.

However the Daily Mail suggests that De Gea is ‘an 80% chance’ of being available for Saturday’s meeting with the Gunners at the Emirates Stadium.

De Gea will be assessed by United’s doctors when he returns to England and could still prove himself fit for the north London visit. Anderson : I Need To Prove What I Can Do!