It has been revealed that Manchester United goalkeeper Sam Johnstone is eager to go out again on loan after last season’s successful stint with Preston North End. 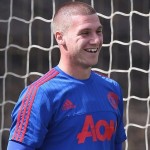 22-year-old Johnstone is currently down the pecking order at United and is keen to get regular game time elsewhere but does not want to move until the current keeper saga is sorted out.

David de Gea has been tipped to move to Real Madrid while the Red Devils have been linked with a move for Ajax’s Jasper Cillesen, suggesting that Johnstone’s future depends on the possible departures and arrivals of other goalkeepers at Old Trafford.

“I’m not sure what’s going to happen,” Johnstone said.

“Nothing’s been said really. We’re waiting on different situations and have to see how it pans out.

“Hopefully I’ll go out on loan because I need to play games. I finished last season on a high playing in the play-off final at Wembley with my hometown club so I need to kick on from that, but on the other hand I am contracted here to Manchester United so I have to see what happens here first.

“So it [the futures of other keepers] does will have a knock-on effect on me.”