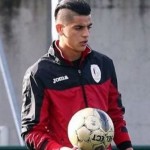 Reports are out claiming that Manchester United have a deal in place for Belgian youngster Moutha Sebtaoui.

The 16-year-old, who is also eligible to represent Morocco, has been followed by Roma, Tottenham, Anderlecht and Newcastle over the past few months.

He has represented Belgium at Under 15 and U16 level.