It has been reported that Michael Carrick could make Manchester United’s clash with Liverpool on Saturday. 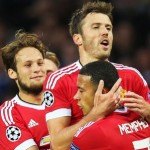 Carrick, 34, withdrew from the England squad for last night’s Euro 2016 qualifying clash with Switzerland due to a calf injury.

The midfielder has since returned to Manchester United for a medical assessment and the club are hopeful that he will be fit enough for Saturday’s clash, says the Daily Mail.