It has been revealed that Manchester United hero Gary Pallister has likened Chris Smalling to Steve Bruce. 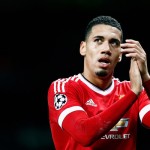 Pallister is impressed by the England international’s progress this season.

“He loves the defending side of the game, which is what we’ve needed from a centre-half, to just be aggressive, be tough, make the tackles and head the balls, dominate the penalty box – all the things that Brucey was and I wasn’t! And that’s what Chris is doing, coming up against these big lumps!”

Pally added: “He’s now a proper defender. He’s more confident, he’s enjoyed a good run in the team and he’s enjoyed the responsibility the manager has given him in making him captain on occasions.

“I think it’s mainly down to the fact that he’s been injury-free for a while; he’s played a number of games now in his preferred position of centre-back and we’re seeing the Chris Smalling we saw when he first came to the club. We’ve needed that solidity at the back and he has provided that.

“If you’re looking for consistency in judging the best player in the Premier League in his position so far this season, I think Chris ticks all the boxes. His performances have been exemplary.”