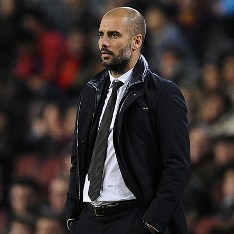 Reports have emerged that Pep Guardiola is being discussed inside Manchester United as a successor for Sir Alex Ferguson.

Ferguson turns 70 today, but shows no signs of letting up.

Real Madrid coach Jose Mourinho succeeding Sir Alex and one day repatriating Cristiano Ronaldo for a last hurrah is not unimaginable. And he has admitted if there is one footballer he would love to train it is Wayne Rooney.

However the Daily Express says at least one confidant close to Sir Alex would prefer Guardiola and had a quiet, private chat with the Barca manager about his general state of mind on that issue.

Guardiola must look appetising to United’s kingmakers for the dazzling brand of football his team plays and for the same intensity and hunger about winning which has epitomised Sir Alex from the first day he pulled on playing boots until today.

Guardiola has admitted to his “passion for the English teams”.

““They are honest, aggressive, and normally they don’t play for a draw,” he said. ”

“In the stadiums of England you breathe football in its pure, natural state. I still remember the first time I played at Old Trafford, it was unbelievable.” Carragher Insists Liverpool Too Strong For Man Utd At Home