Reports are out claiming that Manchester United boss David Moyes is in talks for Bayern Munich midfielder Toni Kroos. 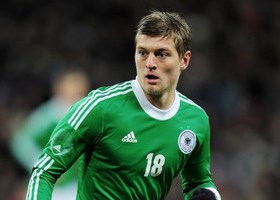 The Daily Mail revealed that Moyes was escorted into Borussia Monchengladbach’s stadium by Toni Kroos’ agent on Friday night after being alerted to a contract stand-off between the Germany midfielder and his Bayern Munich bosses.

It is said that Moyes saw Gladbach lose 2-0 to Bayern last night.

Kroos’ representative Sascha Breese, from the Sports Total agency, met Moyes and coaches Phil Neville and Steve Round and sat with them at the game.

Bayern chief executive Karl-Heinz Rummenigge admitted: “It is always about money in every agreement, and talks have so far failed to lead to a new contract for Toni. We are interested in prolonging his stay with us.”