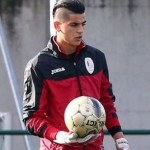 It has been reported that Standard Liege goalkeeper Ilias Moutha Sebtaoui is in talks with Manchester United.

The Mail on Sunday says United are signing another Belgian starlet after fast-tracking a move for Sebtaoui.

United scouts have been impressed by Sebtaoui in recent tournaments. He turned 16 last month and has been followed by Roma, Anderlecht and Newcastle over the past few months.

Sebtaoui is poised to join United on July 1.