Reports are out claiming that Manchester United are being linked with Inter Milan midfielder Fredy Guarin. 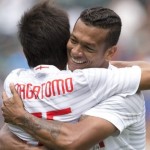 The Daily Star reported that United boss Louis van Gaal is eager to add another midfielder to his squad this summer, and is keen to snap up the 28-year-old Colombia star if their move for Juventus ace Arturo Vidal collapses.

The Dutch tactician is currently assessing the fitness of Vidal before making a club £47m bid for the Chilean midfielder.