Interesting transfer news are out claiming that Manchester United are moving for Porto defender Eliaquim Mangala. 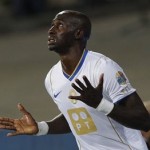 The Daily Star reported that United are in contention to hijack Manchester City’s bid for Mangala.

The 23-year-old is Manuel Pellegrini’s top summer transfer target as he looks to find a partner for captain Vincent Kompany.

It is said that the Premier League champions are ready to splash out £30m, but United have been told he would prefer a move to Old Trafford.

New United boss Louis van Gaal is still contemplating who he needs to fill the void left by the departures of Rio Ferdinand and Nemanja Vidic.