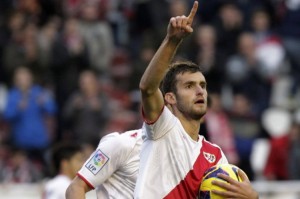 Manchester United have reportedly joined the race to sign Rayo Vallecano starlet Leo Baptistao, however Atletico Madrid remains the most likely destination for the player, who has notched six goals and five assists already in his debut Primera Division season.

According to AS, United manager Sir Alex Ferguson attended Rayo’s 3-1 win over Getafe on Monday to take a closer look at Leo, 20.

Representatives from Liverpool, QPR, Leeds, and Brighton were also spotted at the game, in which the Brazilian attacker again impressed with a superb all-round performance which included the assist for his side’s third goal.

However, Leo’s English suitors could be set for disappointment, as Spanish radio station Cadena Cope reported last week that Atletico had already reached a €6 million agreement to sign the player in the summer.