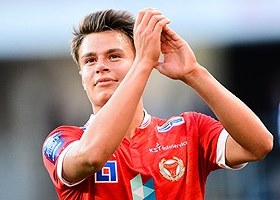 It has been revealed that Manchester United are being linked with Swedish prospect Melker Hallberg.

It is said that the 17 year-old Kalmar midfielder is attracting interest from United, Ajax and Juventus this season.

Despite his youth, Hallberg is a first-choice in Sweden’s U21 team.

The youngster is tied to Kalmar until 2016.