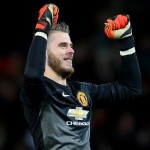 It has been reported that Manchester United goalkeeper David De Gea was delighted with his role in victory over Liverpool.

The Spanish international goalkeeper was named Man of the Match after producing three excellent saves to deny Raheem Sterling, before frustrating Mario Balotelli with a host of unbelievable stops that left the former Manchester City striker wondering how he didn’t score.

“I’m really happy with the three points against Liverpool,” the Spaniard told Sky Sports after the final whistle.

“I thought we were very good and scored three goals – it’s fantastic. I saved twice from Sterling in the first half and a few times from Balotelli in the second half. At the other end, we scored three goals, so it’s unbelievable.”