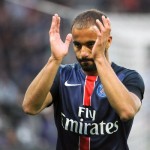 It has been reported that Manchester United are monitoring Lucas Moura’s situation at PSG.

L’Equipe claims that a number of Premier League sides are interested in the 23-year-old who was on the verge of joining the Red Devils when he was 19.

A £31.6m bid from PSG managed to secure the Brazilian much to the annoyance of Sir Alex Ferguson.

Lucas is mainly used by the French side from the bench and he could be tempted by a move to Old Trafford.