It has been reported that Manchester United are eyeing Palmeiras fullback Joao Pedro. 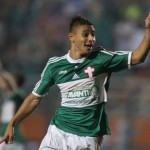 Fox Sports Brasil reported that United have made a €4m bid for the 20-year-old, who currently plies his trade with Palmeiras.

Pedro caught the eye of United scouts at the Under-20 World Cup and would likely join United’s Under-21 side, with a view to promotion to the senior set-up.

Brazilian Rafael has also been told he can depart and reports suggest he could be replaced by his countryman Pedro. Nemanja Vidic : I Am Happy At Manchester United