Interesting transfer news are out claiming that Manchester United is ready to bid for Everton midfielder Marouane Fellaini this week. 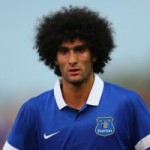 The Sunday Mirror revealed that the move will put David Moyes on collision course with his old club Everton.

During his time in charge at Goodison Park, Moyes saw the Belgium star sign a deal that carried a £24million get-out clause.

Everton feared clubs would use that to prise Fellaini away so were relieved when the ­player was still with them earlier this month when the escape clause expired.

Now midfielder-hungry United will table an £18m bid, well below the valuation in Fellaini’s contract.