It has been reported that Manchester United legend Andy Cole is a fan of Anthony Martial. 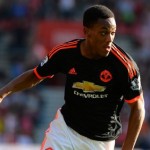 Cole admits he knew little of the Frenchman when he first arrived from AS Monaco.

“I do like him. I’ve got to be honest, I didn’t know a lot about him before he came to United. I watched him play against Arsenal last season but the way he has come in, he’s made a great impression.

“He’s got good feet and great pace. In the modern game, it’s important to have great pace and he’s got that in abundance. He looks a great player and has got off to a great start. It looks like he’s got the right temperament as well.

“He uses his body very well. He only looks like a slight chap but he gets hold of the ball, he’s got good feet and he is prepared to run at people and take them on. He got his debut goal and we know he’s got quality there. Long may it continue for the boy.

“We know football has peaks and troughs and ups and downs but he seems very level-headed. He has come in and he’s settled really well so it looks like he will do well for Manchester United.”