It has been revealed that Manchester United legend Bryan Robson has slammed Chelsea over their latest bid for Wayne Rooney.

The Premier League champions turned down a new offer from Chelsea earlier this week for the England international star. 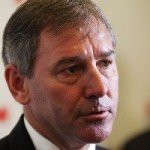 Robson told talkSPORT : “The thing that makes me laugh is I’ve been told it [the latest bid] is £25million to £30million. For Wayne Rooney? A 27-year-old who is probably in the top six strikers in the world?”.

“What are United going to have to pay to replace him? I’m amazed at that. I think it is an insult to Wayne Rooney.”

Robson insists the situation is not irretrievable.

“I don’t know what’s in the head of Wayne and his agent – why he wants to leave,” he said. “I know he had loggerheads with Sir Alex but David Moyes is the manager now.

“To me it is so important for him to concentrate on his football this season.

“I don’t know what he sees – the grass is greener on the other side – the fans love him, the players love him so I don’t see what the unsettlement is.

“Everyone would like to see Wayne Rooney settle down and be part of the team to try to retain the title.” There Is No Invincible Team! – Arsene Wenger