It has been revealed that Manchester United legend Bryan Robson is full of praise for manager David Moyes. 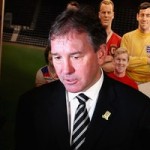 The Scot has just completed his first month in charge at United.

Robson has been very impressed with what he has seen of Moyes so far, saying: “I think he’ll take everything in his stride at Manchester United.

“He’s going to be working with some top-class players and I’m sure he’ll do a great job for the club. He’s handled himself well so far.”

The United legend believes Moyes won’t make sweeping changes to his squad ahead of the new season, but fancies that we could still see one or two big signings.

“I think David knows that he doesn’t need to change much,” he adds. “It’s just a little bit of fine-tuning. He will want to make one or two new signings to lift the players, lift the fans, and get everyone buzzing before the start of the season.” Darren Fletcher To Be Handed Free Transfer By Manchester United