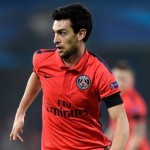 It has been reported that Eric Cantona has rated Javier Pastore as the best footballer in the world right now.

The Manchester United and France legend has swayed against usual suspects Cristiano Ronaldo and Lionel Messi when asked on his views of who the world’s best player is.

“Why? Because I watched two games just to see Pastore playing, giving passes. He’s got something special. Football is interaction, that is why football is so popular I think, and Pastore can do things that others don’t know.

“He does things that surprise you every time. Not only on scoring goals, spectacular goals all the time, just passing, passing.