It has been reported that Manchester United and Real Madrid legend David Beckham was able to make a public appearance last night after being involved in a serious car accident on Saturday. 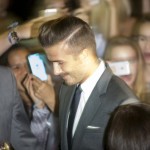 The Daily Mail reports Beckham was back to business, attending an awards ceremony with his wife Victoria, the evening after a car crash involving their son Brooklyn.

The Beckham’s attended the 60th London Evening Standard awards held at the Palladium in London, a night celebrating the best theatre performances of the past year.

The 39-year-old was involved in the accident on Saturday after picking up his eldest son Brooklyn from Arsenal’s training ground in Hertfordshire.

Both David and Brooklyn emerged unhurt from the incident which involved one other vehicle.