It has been reported that Manchester United legend Gary Neville has defended Robin van Persie over his flat performances. 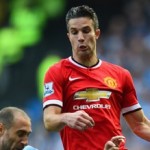 “He’s got to do better in long situations and needs to make better runs. But his team-mates aren’t finding him as much as [Paul] Scholes and [Michael] Carrick were two years ago.

“I called him a burglar before – he lives off back of centre-backs. The type of pass he wants is into space.

“In defence of Van Persie I don’t think his team-mates are in synch as they were two years ago. Maybe Carrick coming back will help him.” Man Utd Not Better Than Us! – Liverpool’s Jordan Henderson