It has been reported that Manchester United legend Denis Irwin is convinced by the quality of Luke Shaw. 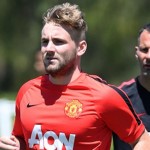 The England international star cut short his summer holidays to take part in a fitness camp in Dubai last month.

“Last year was a bit difficult for him injury-wise, but I know he has worked really hard over the summer and I am expecting Luke to really push on this season,” Irwin told PA Sport at a Special Olympics event in the US organised by United sponsors AON.

“He is still young so he will still make mistakes but hopefully he will stay injury-free, get a good pre-season under his belt and then he will be up and running.

“He’s had a whirlwind two years. He broke into the Southampton team at a really early age, exploded on to the scene, and went to the World Cup, and then joined Manchester United.

“I think he is a fantastic player.

“He needs to stay injury-free and get a run of games under his belt to get his confidence high and then we will see the best of Luke Shaw.”