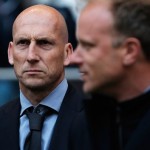 It has been reported that Manchester United legend Jaap Stam admits he’s ready to leave Ajax.

Stam is coaching inside the youth system at Ajax and admits he wants to move to a higher level.

“I’m still not thinking about next season, but I do know that I want to be head coach,” he told Ajax TV.

“So if a great club makes an offer, then there is a chance that I’m going to do just that. Unless they have another nice job for me at Ajax.”

Before returning to Ajax, Stam also did some scouting for former United manager Sir Alex Ferguson.

“I feel that the time is right, I want to have more responsibility,” he added.