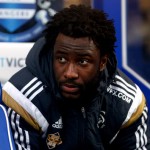 The Ivory Coast international is expected to sign for the champions this week in a £30 million deal.

“I worry about the purchase of Wilfried Bony, who is a very fine centre-forward but is not certain to add the kind of intricacy and ferocious intensity they found in the Sergio Aguero and Carlos Tevez partnership,” Neville told The Telegraph.

Neville added that City, who are unbeaten in the Premier League since the end of October, need greater consistency across all competitions to land titles year on year.

“The owners will want sustained success: back to back titles and a serious challenge for the Champions League. The quality to go again, go again and again,” said Neville.

“There is no doubt City are a good Premier League team. However, for them to be an outstanding team they will have to acquire the consistent intensity you see at the two Madrid clubs or Bayern Munich.”