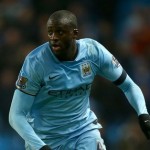 Reports are out claiming that Manchester United legend Gary Neville has questioned the future at Manchester City of Yaya Toure.

Neville feels the Ivory Coast international is now bordering on being a liability.

He told the Champions League Podcast: “You can’t play with Yaya Toure in midfield as a two anymore, there’s too much evidence in big matches now over a lengthy period of time to suggest that he’s not capable of doing that.

“Do they move on the likes of Toure? Or do they think no, Toure is a fantastic player but we won’t play him three games a week.

“We can bring somebody else who can take his role on a Wednesday night so Toure has more energy for nights like this.” Radamel Falcao Confident Of Settling In Quickly At Man Utd