It has been revealed that Manchester United legend Gary Neville is shocked by the lack of English talent in the Premier League. 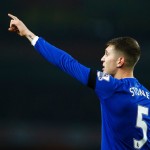 He is worried about how few players he and England boss Roy Hodgson have to choose from.

Neville told the Daily Star Sunday: “I can’t believe what is going on. I don’t understand it and I don’t know how we correct it.

“We now have only 27 per cent of Premier League players who are available to England.

“And at the moment we also have players like Jordan Henderson, Jack Wilshere and Danny Welbeck who are injured.

“So when we look to select our squad, we look at the pool of players and you know this situation cannot be right.

“I loved seeing Ronaldo and Eric Cantona out there for United and any of the other foreign players who have come from abroad to play here. At the moment, though, the balance has tipped too far.”