It has been reported that Gary Pallister believes Chris Smalling can become the club and country’s captain in the near future. 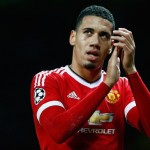 The Manchester United legend is a huge admirer of 25-year-old centre-half Smalling and feels the former non-league player can one day become skipper of both the Red Devils and the England national team.

“It’s very feasible as he is United’s vice-captain so as long as the manager keeps getting his name right he’ll be alright,” Pallister told 888sport of Smalling.

“He’s been United’s most consistent player this season. He’s taken the role by the scruff of the neck and made that centre-half position his own producing commanding performance after commanding performance. Hopefully he transforms that into England performances and then he could be a future England captain. This year he’s been captain-like. He’s led from the front, been dogged, and been that kind of player people follow.

“Chris is in a rich vein of form but he needs to continue that over a period of time. If that’s the case then people will start talking of him being a leader.”