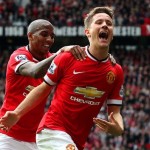 The Spanish midfielder arrived at Old Trafford in a £28m deal from Athletic Bilbao, signing a four-year contract last summer, and after a slow start has come into his own at Old Trafford.

Speaking on Newstalk 106-108 FM Scholes said: “I think it was difficult for all the signings at first.

“I think I’d have to say Herrera’s the one who’s impressed me most.

“He was another one who did struggle.

“He’s been a really good addition.

“He’s only young as well so hopeful he can get even better.”

Herrera has scored 7seven goals and provided five assists in 27 appearances for the Red Devils in his debut season. Gary Neville Insists Man Utd One Signing Away From Glory