It has been reported that Manchester United legend Paul Scholes has launched a furious attack on Liverpool striker Luis Suarez. 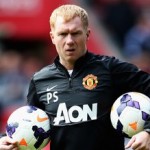 The former Ajax star will start for Uruguay today in their World Cup clash with England.

Scholes has branded him as SELFISH and LUCKY ahead of England’s crunch World Cup clash with Uruguay.

Scholes, in his blog for Paddy Power, wrote: “In 2012/2013 Suarez was pretty selfish and missed too many chances for Liverpool.

“Thinking of my time at Man United we didn’t worry about Suarez much.

“He’d barely get a kick at Old Trafford and I don’t remember any specific strategy to try to stop him playing, like we did with Park Ji-Sung on Andrea Pirlo in the Champions League, for example.

“Suarez is a lucky player. The ball seems to bounce off him into the right place. Luck or skill – he gets breaks other forwards don’t.”