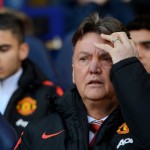 Reports are out claiming that Manchester United legend Bryan Robson is convinced Louis van Gaal’s team is on the right track – despite defeat to Southampton.

Robbo insists they are on the rise.

“I have watched what Louis van Gaal is doing and I feel we are improving,” Robson told the Manchester Evening News.

“Despite having the same points tally, I think we have improved from where we were last year.

“City have had their group of players together longer than we’ve had ours.

“If we finish third this season then that will be great. That is still the aim.”