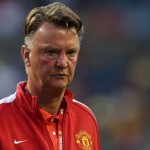 The Scot discarded players when decided they were not good enough or lacked the discipline and commitment he demanded.

Van Gaal has headed down a similar route with his release of a trio of senior players.

“Louis van Gaal has been very successful in his career. He has been a bit ruthless with a few of his decisions lately and that is what good managers do.

“At certain stages, managers have to make major decisions and sometimes people have to move on and the manager has got to change things the way he sees it. And that is what he is doing, that’s part of his job – you have to be ruthless at stages.

“With Valdes, it didn’t suit the manager, so he has moved him on.”