Reports are out claiming that Manchester United No2 Ryan Giggs is happy doing his managerial apprenticeship under Louis van Gaal. 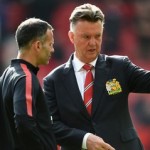 The legendary Welshman was named Van Gaal’s No2 at the start of the season.

Asked about his relationship with Van Gaal, Giggs said: “It’s good. He’s been really good with me and he’s given me a lot of responsibility.

“He didn’t know me before I met him and pre-season helped because you’re living in each other’s pockets for three weeks and you get to know each other really quickly. It’s sort of a fast-track to getting, not only to know the manager, but the rest of the backroom staff.

“I know the club, I know the culture and I try and help the manager with that, but obviously he’s the one with the experience and he’s managed so many clubs.

“We try and learn as much as we can from each other. I know some of the players that we’re playing against as I’ve played against them.

“It’s just about trying to help each other, but he’s the manager and he makes the decisions and I’m trying to learn from him as much as I can.”