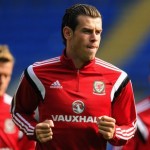 The 25 year old played with Giggs for Wales in the latter years of his career.

He told BT Sport: “‘I always used to watch Ryan Giggs growing up for obvious reasons, he played on the left, same as I do, and he’s Welsh and everything like that.

“So for me I always used to watch him play and the way he played football was so nice to watch. The things he could do with a football were incredible.”