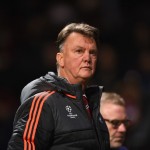 Despite gaining a point at in-form Leicester City, when Bastian Schweinsteiger cancelled out Jamie Vardy’s opener, the Dane saw little to shout about in the 90 minutes.

He criticised “irrelevant passing”, claiming the players were not looking to create chances.

“I want Manchester United to try and win the game. In the best days – under Sir Matt Busby and Alex Ferguson – they were always going for it.”