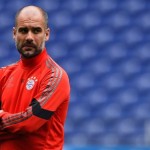 It has been reported that Pep Guardiola is likely to become Manchester City manager in the not-too-distant future.

That is the opinion of former Manchester United midfielder Paul Scholes who is of the belief that the Bayern Munich boss will head to the Etihad Stadium when his contract at the Allianz Arena expires in the summer of 2016.

In his column for the London Evening Standard, Scholes wrote of the ex-Barcelona boss: ‘…all the information that comes back to me in Manchester is that Pep Guardiola will take that job (at City) when his contract at Bayern Munich expires in one year’s time.

‘As for Guardiola, establishing Manchester City as European champions would be bigger than any of the challenges he has faced so far in his career.

‘While City have many good players, they have never gone beyond the second round of the Champions League, much less won it.

‘It would not be easy, but then Guardiola is not there to do the small jobs. He is there to make the difference between a good team and a great team. I met him when I played a friendly game in Munich last summer and he was a very likeable man who was easy to talk to.’