It has been revealed that Manchester United legend Paul Scholes is critical of Bastian Schweinsteiger’s game. 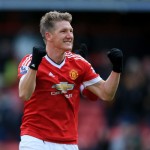 Scholes was speaking before the midfielder forced the winner at Watford.

“Schweinsteiger constantly ends up in the left-back position.

“I don’t mind that, getting a bit of space if you’re going to play it forward or hit a long pass, but he takes too many touches and he’s constantly coming back inside.

“Schweinsteiger claps a backpass to the goalkeeper and he plays every week, so the manager must be happy with the way they play.

“You expect more from Schweinsteiger, a player who’s won the World Cup and the Champions League.

“The biggest art as a midfield player is to find space – not in your back four or left-back position – in the centre of the park where it’s most congested, and contribute to your forward players.

“Defensively they’re brilliant, and that’s why because they’re not contributing going forward.”

It Would Be Massive To Beat Manchester United! – Aaron Ramsey