Reports are out claiming that Manchester United great Paul Scholes has criticized Mesut Ozil and Geoffrey Kondogbia after the pair swapped playing shirts at half-time on Tuesday night. 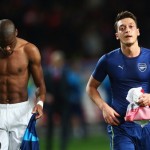 Arsenal playmaker Ozil and Monaco midfielder Kondogbia bizarrely gave up their respective shirts to share with one another at half-time of the Champions League Round of 16 second leg at the Stade Louis II.

Of the incident, the old-fashioned Scholes felt it was a little out of place and believes if players want to swap shirts then they should do it away from prying eyes.

“I don’t like it. At the end of the game, maybe. But still I’m not a big fan then,” Scholes said on ITV’s coverage of the game.

“You do it that once you’re in the tunnel or in the dressing room, out of the way of everyone. At half-time, it’s not for me.”