Reports are out claiming that Manchester United legend Paul Scholes has backed his former teammate Jonny Evans after he became embroiled in a spitting row. 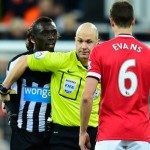 The Northern Ireland defender, 27, appeared to spit in the direction of Newcastle United striker Papiss Cisse in Wednesday night’s 1-0 win to United at St James’ Park.

In a column for The Independent, Scholes absolved Evans of blame while suggesting Cisse’s actions were simply not on.

‘I have watched the footage of Jonny Evans and Papiss Cisse’s spitting incident and I come to the same conclusion that was my instinct the first time I saw the replay: I don’t think Jonny ever intended to spit at Cisse,’ wrote Scholes.

‘Jonny is an old teammate of mine and a bloke I like, but let’s put that to one side for a moment. I read his statement that he did not spit at Cisse and I believe him.

‘I could tell you that Jonny is just not the sort of lad to spit on an opponent – although that is what I think – but a clear-headed analysis of the situation proves my point better than any character testimony I might offer.

‘Clearly, what Cisse thought had happened provoked a response in him. I can understand that he was upset but his reaction was horrible. He got right in close to Jonny and spat into his neck. He has accepted the Football Association charge and has been banned.

‘The FA also charged Jonny who had earlier protested his innocence. I agree with him, I think he spat at the ground rather than his opponent.’ Moyes Will Be A Huge Success With Man Utd – Tim Howard