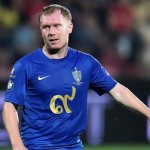 Reports are out claiming that Manchester United legend Paul Scholes is no fan of Louis van Gaal’s 3-5-2 formation.

Scholes wrote in the London Evening Standard: “Southampton’s win over United on Sunday reinforced my thoughts on the 3-5-2 system Louis van Gaal has implemented.

“My issue with it has always been that it gives a team the security of having possession without offering them the opportunities from which they might score the goals that win the game.

“You might remember that Liverpool played a similar system in the mid-1990s and we went into the 1996 FA Cup final worrying whether we would get a kick against them. They may well have had more possession than us but we always believed that playing with two wingers, and one striker off a centre-forward, would give us the opportunity to create the chances we needed to score goals. And so it proved.” Man Utd Locked In Talks With Ajax For Daley Blind