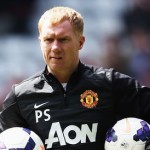 The 40 year old believes Rodgers’ failure to build on their second-place finish has cost them a chance of winning the title.

“I rate Rodgers as a manager,” Scholes wrote in his Independent column.

“The expectation at Liverpool got out of control last season and now, when the belief from the fans has been that they should take the next step, the team have been unable to do it.

“I go back to the signings once again. They weren’t good enough. A manager lives and dies by the players he brings in, especially when someone as big as Luis Suarez leaves.

“For instance, the £20m price for Dejan Lovren means that instead of looking like a smart call on a player with potential, he becomes a £20m defender with all the pressure that brings.

“To go to the next level, Liverpool needed two top-quality signings but they have not been able to get those players and so the momentum that they built over the course of last season has been lost.”